Last night we went clubbing for the first time since my come back to Poland. My German cousin was responsible for it, after a whole day of showing him the city, at 10pm he asked “when do we go to the club?” I don’t mean to age myself here, but at 10pm the only thing on my mind was sleep. And with allergies kicking my arse dancing was not at all what I wanted to do.

But I was wrong. Since I already had a glass of wine for dinner, I let my cousin drive my car and around 11pm we found a club we decided to stay in. A few of the places before it were either too cramped or too loud. A couple of drinks later I met a two more cousins and a few friends who just happened to be at the same club that night. That’s what I like about this city, I can actually bump into people I know. We danced, drank, and laughed till 3am, got home as  the dawn slowly crept up.

It was a very good night. Thanks Frank. 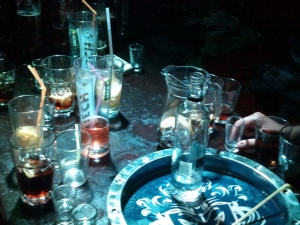