The reason the last couple of posts are from Warsaw is my very first Polish wedding since my return to Poland. Karolina was invited by her friend Julia, and I was invited as Karolina’s arm candy. I played the part fine…for a while, because as it turns out you shouldn’t mix champagne, red wine, and vodka all in the same evening; but I won’t get into that.

We spent the weekend at Julia’s sisters, Maryla’s, apartment; a great little place near a park, a metro station, with a great host to boot (Thank you Maryla!). Once there we met up with a Polish/British couple Patrycja and Shaun, and another Polish/British duo the next day, Asia(Jo) and Hamish. It was a very multi-cultural gathering at the apartment; Maryla spent the first half of her life in Canada, Hamish and Shaun are both British, Karolina spent many years in Germany, Patrycja and Asia have both moved to the UK, I spent most of my life in L.A., and the entire weekend was pure humorous, English language, fun. 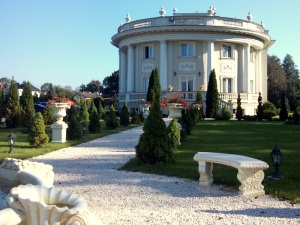 The wedding took place at castle looking place outside of Warsaw. It was all new, styled to look old, I think. I don’t have any photos of neither the place nor the actual wedding other than the couple of shots taken with my cell phone. The ceremony itself conveniently took place in a church a walking distance from the reception hall, and the reception itself reminded me of an American style wedding reception rather than the typical Polish wedding I’ve seen before. And honestly, I liked it more this way.

A typical Polish wedding would have all the tables set up along the four walls of the ball room, with dancing area in the middle. It get’s crowded, people dancing bump into your table when they lose a step, and you have to pass twenty other guests on your way to your seat somewhere along the wall. This wedding had two separate sections, one with big round tables and one specifically for dancing and wedding games. It looked much nicer, it felt better, and I think this is the proper way to throw a wedding.

I’ve never met the bride and the groom, Julia and Paweł, before the wedding, and I didn’t get to meet them afterward either because of their honeymoon flight to the Dominican Republic the very next day. But I would like to thank them for a great party and wish them all the best on their life together.

One thought on “A Polish Wedding”