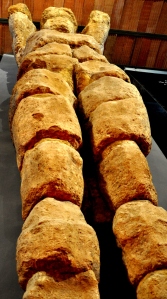 Agrigento is a city on the south side of Sicily with population of around 60 thousand established in 580 BC. After a six day work week we decided to make the most of our Sunday and took a drive to the southern coast to do some sight seeing. Even though it was my third visit to the island it was my first opportunity to see something, anything, other than the small town of Camporeale on the way to our solar site.

The trip got off to a rough start due to our GPS guidance through some roads that shouldn’t really be called roads at all. The four of us squished in a little Fiat 500 scraped the undercarriage numerous times as we tried to navigate the pothole upon pothole, at times trying to figure out how to even get from one asphalted section to another without losing any essential car parts. The problem really is that our GPS guided us any way possible toward our destination, small country road or two lane highways, it doesn’t care as long as it gets us there.

The roads eventually did smooth out and we were soon greeted by orange orchards on the south side of Sicily. It felt warmer in the south, but it was a beautiful day all around, and it was a nice change from snow and rain we had during the week. Our goal was to visit the “Valley of the Temples” and then maybe see a bit of the city itself. The museum near “The Valley” closed at 1pm so we visited it first. Inside stood a huge Talamone made of stone, the sheer size of it was unbelievable, and you can see it for yourself on the photo where Tammi, our driver and trip adviser, stood in front of it for scale.

From the museum we went to the site of the Valley of the Temples and walked around some beautifully preserved ruins. Temple of Concordia, and Temple of Hera are some of the best preserved Greek ruins outside of Greece itself. Temple of Olympian Zeus is where the Telamons were used as support, the temple has been destroyed but one Telemon still lays where it would have been centuries ago. From the site we drove into the city and walked around what seemed like Rodeo Drive for the locals. Gucci, Prada, hand bags and shoe stores, all with prices not my wallet friendly, and all seemingly out of place in a town with one of the lowest per capita income levels in Italy. The town also apparently has a problem with organized crime and Mafia, but luckily we saw no signs of that, didn’t venture into any dark alleys, and stayed together as a group.

Coming back we tried to find a seafood restaurant but failed miserably once again due to our GPS; telling us to make a right turn on a bridge, or left on a highway with no exits. We eventually found a place from the GPS’s points of interests library and it turned out to be a hit. Baffo’s Castle located near the town of Castelvetrano was completely empty when we arrived but that’s because we were there at 7:30 pm, and no one eats this early in Sicily. Wood fired oven promised some great pizza, but the fresh sea food sitting on ice in a display case was what I had in mind for the evening. Seafood linguine and grilled calamari, not fried pieces, but grilled full size calamari, was really delicious. Everyone else liked their pizzas just the same. The drive back was painless as we figured out what highways to take, but most importantly, which roads not to take, and got home quick and easy.