The Renoma department store was built in 1930 by family Wertheim, a name well known in the trade business. At the time it was the biggest department store in Wrocław, then known by its German name Breslau. The building was bombarded during WWII and burned for days. It wasn’t until 1953 that the first floor was reopened for business, the second floor took 15 more years to finish, all the way up to the 5th and 6th floor that were reopened in 1986. Renoma was sold and privatized in 2005 and a major modernization project that was completed in 2009 brought customers and glamor back within its walls. 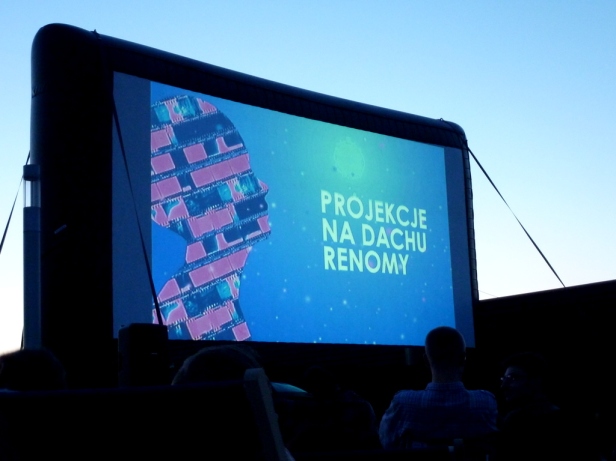 The reason for this short history lesson is a very cool event Renoma hosts on top of its roof known as Summer Cinema. The free showing starts at 9:30pm and takes place every weekend throughout the summer. On a hot summer day there’s no better way to watch a movie than eight stories up under a dark blue evening sky on a huge blow up screen. The movie selection is definitely not for everyone though; as I mentioned the whole thing is free and I assume the film royalties are kept to a minimum. Last Saturday we saw “The Limits of Control”, a film by Jim Jarmusch that is simply freakin confusing.

The best way to describe that movie is to quote a couple we heard talking next to us after the movie: “Maybe if we ask someone they can tell us what this movie was about?” The movie had its moments and right when I almost felt that I understood it Bill Murray showed up on the screen and I was lost all over again. Though it was a serious movie I couldn’t stop smiling at everything Murray did. I hope I don’t spoil it for everyone when I say that it wasn’t his longest role ever…

But the movie was just a filler really. The night was about getting together with some friends and enjoying the beautiful view of Wrocław from way up high, and overlooking the construction of the Sky Tower that is already the tallest building in the city. Drinking alcohol is strictly prohibited…but only if you get caught! I highly recommend Renoma’s Summer Cinema at least once this season.