A week ago Sunday, wow does time go by fast, we decided to ride our bikes over to our friends new condo located in Święta Katarzyna (Saint Catherine) just outside of Wrocław. The trip followed a 26km (16mile) curved line from one end of Wrocław past the complete opposite side of our city. 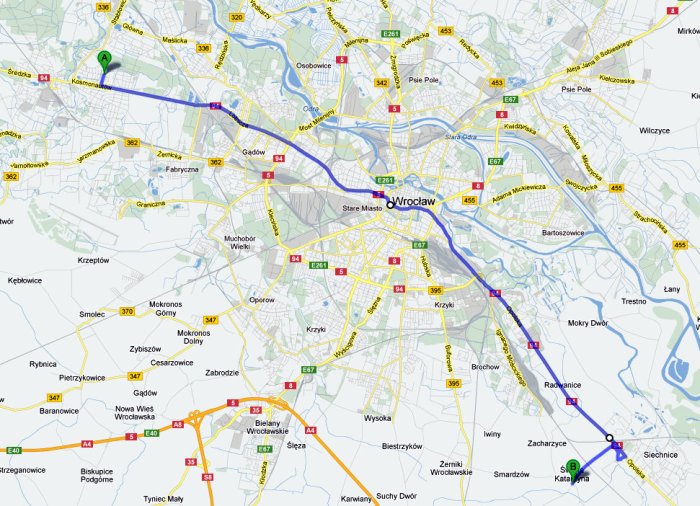 It was just a gorgeous warm Spring day full of sun  ideal for a bike trip around the city, even though it was still just a few days short of officially being Spring. Wrocław does a pretty fair job in regards to bike paths. In a country where bicyclists aren’t exactly cared for much by asshole car drivers it gives a bike rider a feeling of safety to be able to follow a lane separated from the mayhem out on the road. This of course is nothing new in Western countries that have made their roads bike friendly decades ago, Poland is just now catching up. There were a few parts where the path would suddenly end… leaving you with a WTF face as you keep riding your bike only to rediscover the path some 200 yards later. The path also changes the side of the road a bit too often in my opinion. This is probably due to an actual problem of squeezing a bike path into a city that doesn’t have much room for it to begin with, but you end up wasting a lot of time waiting for a green light just to follow the path from one side of the road to the other.

At about the half way point, which to us meant the center of Wrocław, we stopped by a sun lit coffee shop for a latte and waffles. Sunday mornings spent in a coffee shop somewhere in the city or even near by one’s house seems very normal to a Westerner, but this tradition if you will is not so much at home in Poland judging by the empty seats all around. Plenty of people taking walks, playing with their kids, walking their dogs, but not too many willing to spend ~$3 bucks for coffee. This is changing slowly with the Starbucks culture slowly taking over and our generation of folk wanting to get out of the house more often. I read an article recently in a Polish edition of Newsweek about Starbucks’ founder Howard Shultz that focused mostly on his success at running the company but also mentioned how Polish citizens are more and more inclined to pay $3 bucks for coffee. I am not making the case that Starbucks will make coffee houses popular in Poland again, Poland’s tough post war history just didn’t make it to coffee house friendly and big names to the likes of Starbucks and Coffee Heaven are slowly making themselves at home within the Polish culture.

Soon after we continued our journey the bike path ended permanently and we were forced to share the road with everything from scooters to big rigs zooming by at 50 miles per hour.

Thankfully Sunday traffic was light and we made it to Święta Katarzyna fairly fast, just in time for beer an grilled sausage!

Piotr and Asia are first time home owners and are only one of three families that have moved in so far in their building. Needless to say there’s still a lot of work that needs to get done such as laying down some brick work on their outside patio or making the back yard look like an actual back yard and not a construction field. They couldn’t wait and moved in a bit prematurely, but at least now they get to wake up in their own home! The dog seen on the photos is their neighbors, but with no fences in sight she sat there pretty much the entire time we visited. 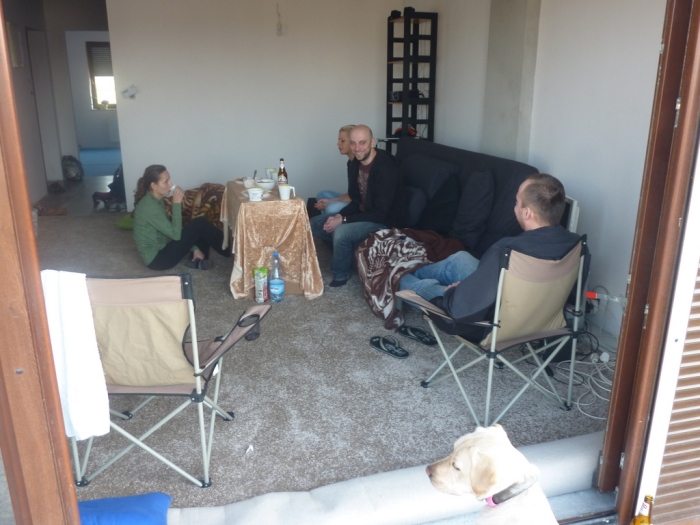 A few hours and a couple of beers later it was time to head on home… except that we decided to take a train back instead. It’s only a 15 minute train ride back to Wrocław and because the ticket line inside the train was so long we ended up getting to the final station before ever managing to buy a ticket. Once again, the system fails all by itself.