Yesterday we stopped by Wrocław’s edition of the Oldtimer Swap Meet. I didn’t know what to expect as I’ve never been to this kind of event in Poland, but I quickly find out that this oldtimer swap meet was anything but.

The name suggest an old timer extravaganza at this particular flea market, but as I looked at hundreds of new motorcycles all around I had a hard time connecting the name to my surroundings. Of course there were small vendors with used parts present, but they were grossly overshadowed by vendors with fairly new stuff from Harley Davidson leather to body parts and actual modern motorcycles for sale. New and used tires seemed to be in demand as well with a crap load of rubber on display at the meet.

But nothing beat the sheer amount of motorcycles for sale. Hundreds of bikes all with prices and phone numbers clearly marked. I had no idea the motorcycle market was this big in Poland. I’ve seen plenty of motorcycles listed on Polish eBay, but to see so many of them all in one place was quite a sight. Again, it’s not that there were so many motorcycles gathered in one place, it’s the fact that they were all for sale!

What sort of saved the old timer theme of this swap meet was a small section of classic cars for show. From old Polish classics to good old American muscle, there were quite a few good looking cars there yesterday. Some, too, were for sale but prices seemed steep even by American standards and it seemed that perhaps these owners didn’t really want to sell their cars at all.

In the ‘pile-o-crap’, as I like to call it, present at the swap meet we found a few jewels here and there. Mainly old vehicle books from that 60’s and 70’s that were really cool to look through. The Wartburg logo seen above reminded me of my dad’s old car from the 80’s, a 2 cylinder Wartburg station wagon. 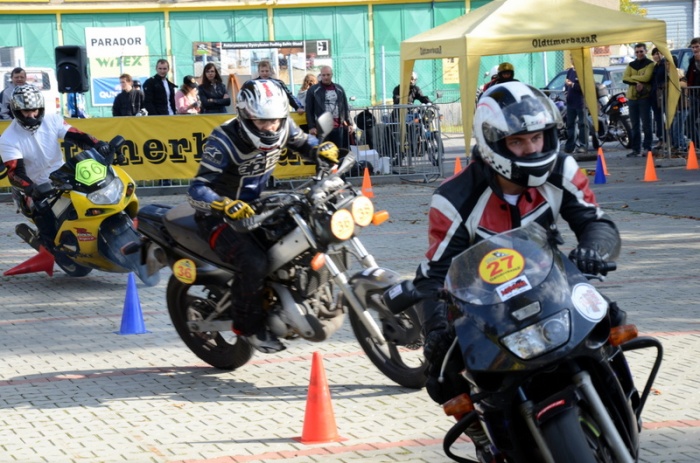 For the entertainment portion of the swap meet two separate events took place: timed slalom riding and a stunt motorcycle show. The former was an alright show, I mean it was cool to see how tight of a corner a huge 1200cc motorcycle can take, and in some cases how a motorcycle can slide out from underneath you. But it was the stunt riding that stole the show. To really take in what went on I’d like to invite you to watch my short film from the show as there’s no real explaining how they do what they do. There was even a couple of guys stunt riding scooters which made me wonder just a bit how difficult my very own GOVECS scooter would be to wheelie… just kidding boss.

For the lack of a better name I suppose calling this event an Oldtimer Swap Meet fits fine as long as you already know what to expect. I only found one single part for my Schwalbe project, a horn, but then I read 6V on it and quickly realized that my electric Schwalbe won’t have a 6V connection at all. One more detail to consider down the line.

Follow the link to a Picasa album: More photos here!

And here are a few chosen WordPress photos.