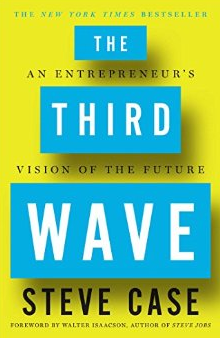 I came across this book as it was pretty heavily recommended by a few sites I happened to stumble upon about a month ago. The third wave is…well, you gotta read it first I suppose. But the basic idea is that we take for granted technology that was very much unheard of just a decade ago. Twenty years ago we used a dial-up modem to get online. Today we get itchy when our wifi connection is less than broadband, and no one ever thinks about plugging their laptops and tablets to a LAN cable, much less a phone line. The third wave takes these innovations and briefly introduces a few ideas of the future.

But mostly, the book goes over the history of AOL (America Online), as the author Steve Case thinks the ups and downs of his former company a pretty good example of what any entrepreneur has to go through. At the end, Case even states that he never wanted to write a history of AOL, but being that history has a way of repeating itself, he wanted to tell the story and teach the new generation of what’s to come.

Take aways: work hard, keep in mind that your great idea doesn’t have to be ingenious, but that it can simply innovate on the subject matter you already know well or are familiar with, and work together with the government. It may be slow and cumbersome, but Case argues that real disruptive projects of the future will require government assistance, or at the very least, government approval (think flying cars, etc.)

One thought on “Book Review – The Third Wave”