Temperatures in Poland have been hovering just below the zero degree Celsius mark, meaning that it has been freezing here for the past couple of weeks. I figured that going back to our summer vacation was a good way of warming up a bit. So without further ado, here’s my write up of Pamukkale.

Pamukkale means “cotton castle” in Turkish. It’s a natural site of hot springs and terraces of carbonate minerals that give it that beautiful white glow you can see on photos below. The natural spring water flowing through is pretty warm, hot even, and walking through the many pools of water bare foot is like walking on a cushy layer of goo… but it feels pretty nice actually.

Hierapolis was an Ancient Greek city located around the hot springs. Today its ruins comprise an archaeological museum that has been put on the UNESCO World Heritage Site list. The entire site has many ancient Greco-Roman artifacts, with toppled columns found throughout, and a huge theater built in 60 AD.

Right in the middle of it all is Cleopatra’s Pool, a spa wellness center advertised by all as having healing water within. The water itself is rich in minerals and maintains a temperature between 36-57°C, but the thought of being in the same water with a bunch of folks who came here especially to dip all their diseases somehow didn’t seem that appealing. It did look appealing though, for bacteria water…

The trip was really great. And if you know me at all by now you’re wondering “Ok Sławek, so what’s the catch? What have you not told us that really rubbed you the wrong way that day?” 🙂

It was the bus ride itself. Let me explain.

Pamukkale is 311km away from Side, that’s 193miles to my American friends. A four hour drive according to Google Maps. Easy, right? WRONG!
The tour bus picked us up at 6am, meaning 5am wake up call to get ready. By 7am we were almost done picking everyone up from their hotels and we are then informed that the bus tour to Pamukkale includes a few scheduled stops.
Stop 1: Breakfast. A quick 30 minute stop at a roadside place that serves local food. My omelette was actually two none-scrambled eggs.
Stop 2: A leather factory. The bus stops near a big building, we’re told to get in, everyone’s seated around a home made catwalk. Two models, a female and a male, walk up and down showing off various leather arrangements. We’re then asked to walk around the store, “everything’s on sale!”, but it’s still pretty expensive. About an hour gone.
Stop 3: Lunch. Not on the tour list, most people seem surprised and wait around the bus as a small group eats lunch. One hour gone.
Stop 4: Textile outlet: Again, bus pulls up, everyone gets out, we’re given special coupons, nothing seems priced within reason. Another hour gone.
Stop 5: Stone factory: We’re given a quick show on how local stones are being polished. There’s a special type of stone found only in this general area and of course everything inside the store is made of this. Again, kind of pricey. Another hour gone.

After this we finally get to Pamukkale. We enter the museum at 3pm! Nine hours after leaving our hotel. A four hour drive with 5 hours of unnecessary stops no one had ever informed us about. The tour guide told us that every tour company has some deals signed with local shops and that every organized tour makes similar stops. End of rant.

Hope you enjoy the photos. 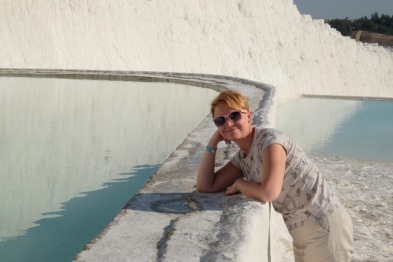 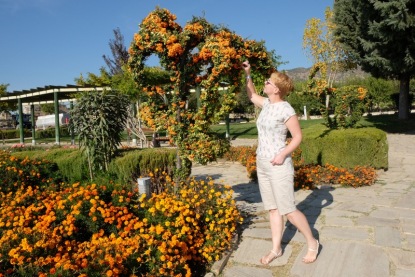 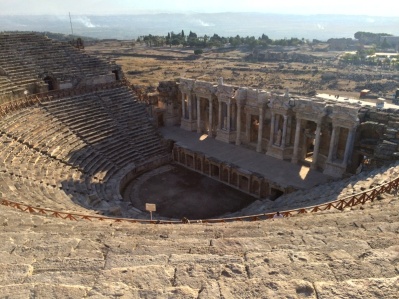 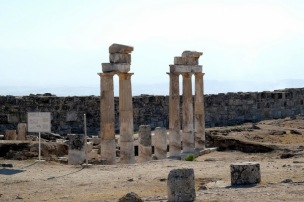 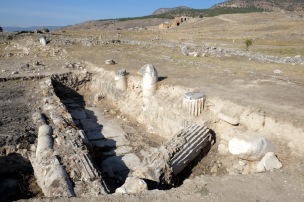