Yesterday was Wroclaw’s first real snow day of the season and the city freaked out.

Perhaps it didn’t freak out as much as it simply shut itself down. And that shouldn’t happen in Poland in the winter time.
It’s only natural that we associated winter with snow. I know, I know, but in Poland that is a safe assumption. Yet it seems that every year we get less and less snow which has its side effects.

For instance, once I moved back to Poland I began seasonal tire rotation between a summer and a winter set. Something I never thought about in Los Angeles. But even in my short tenure here I noticed that winters have become milder and these days I keep hearing more and more about people buying all season tires, which are kind’a good for summer and kind’a good for winter but not great for any specific season in particular, or even not changing their summer tires over to a winter set at all! The argument is that with so little days of actual snow on the ground, it’s cheaper to just weigh up your odds in hopes of no snow and save some cash.

This theory, of course, fails miserably when we get around 10cm of snow within a couple of hours. HOURS!!! Those summer tires would probably be OK assuming road crews did their job and some preventative work before snowfall. As it happened yesterday, no such work was done and all of Wroclaw’s snowplows were stuck in traffic caused by accidents and shitty road conditions due to, wait for it, snow on the road.

It has become a tradition of a sort to say that “snow once again surprised city officials this winter”. Because you know, it shouldn’t be a surprise at all in the winter.

It’s not only city officials and their snow crews that are to blame though. Because snow is so scarce these days in Wroclaw people have quite simply forgotten how to deal with it. There are drivers who haven’t driven on snow in a long time, and there are drivers who have never ever driven on snow. But everyone has to get to work, and everyone has appointments to get to on time.

Yesterday it took my buddy Damian 2.5hours to drive 8km. It took Ania one hour to get through 3km. And all day I kept seeing people getting to work with a solid 2-hour delay due to traffic conditions. Even those hoping to leave their car and hop a bus didn’t have much luck. Have a look below on the photos from the local paper, Gazeta Wroclawska

My favorite from the photos below is the Google Map showing just how stuck the city was in the morning and the electric rent-a-scooters that of course did you no good in all that snow.

When thinking about this snowfall I can’t help but think back to all the Storm Watches that pop up every time a little rain falls on Los Angeles. This would be our own local Snow Watch 2019! 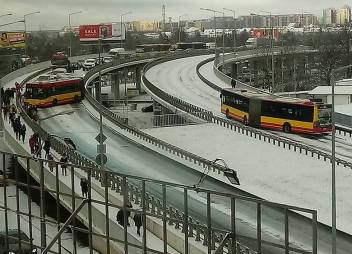