After spending 6 hours with customs agents explaining in detail with full documentation that my 4Runner indeed belonged to me for the past 6 months, and that I had lived in the U.S. for the past year, I was able to get my car out of the sea port where it had arrived a week earlier. This would have been much simpler had I just wanted to pay customs fees for the car. But because I had moved from the U.S. to Poland I am allowed to bring a car duty free with no custom fees which would be around a $1,500 bucks.

I am still unable to drive the car up my own drive way, but I was able to make it through the mud to Karolina’s drive way even though it was still border line crazy to attempt it. I was given many praises by the construction workers today when they saw a car on this side of my torn up street.

The photo below technically satisfies two of Mr. Galpin’s requests; 1) photo of my 4Runner albeit not on my own driveway 2) photo of my torn up street. 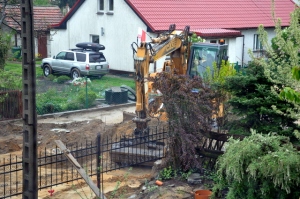 One thought on “Safely Home”