Lubin, a city 40 miles west of Wrocław, has by far the largest car swap meet in the region. Wrocław has its own of course, but it’s much smaller in both actual cars for sale and parts available. Winter is coming up fast and I did my best not to look surprised one day when asked “have you bought winter tires yet?”. I’ve been driving on L.A. Freeway’s ever since I got my license and had no concept of what winter tires are. I do now. Deeper thread with softer rubber translates into better grip on snow while soft enough not to tear apart on pot holes. But since I drive a 20 year old German time machine I wanted to get a set of good used tires to last me only a season or two, by which I’d like to maybe swap my car altogether. 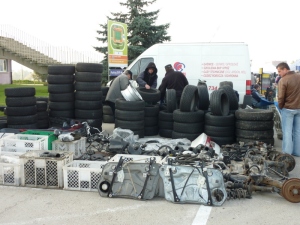 Finding tires wasn’t hard since I’m not the only one looking for snow kicks for my ride. There were maybe 30 places just like the one on the photo where you could either buy just the tires or get a set of complete wheels for an easy swap. After visiting every tire vendor there I got my set of 4 snow tires for $80 bucks. Throw in $20 for the swap some time in November and I’m done. I’ve been to plenty of junk yards in the States, but I’ve never seen this big of a selection of car parts anywhere before. From air bags, to windows, to doors, complete panels, electronics, it was all there, every given Saturday.

Trying to gauge just how much money I’d need to get a better car I walked through the car lot as well. A definite majority of cars for sale were straight imports from Germany. And I’m not saying they were German cars such as BMW or Audi, but that they were bought in Germany within the last month or so with strict intent of reselling it in Poland. It’s easy to tell just by looking at the license plates. Any German ‘dealer’ plate will have an expiration date. When buying a car in Germany, you would pay for a license plate to take the car across the border, the longer time you request the more expensive the license plate is. This of course created a subculture of fast businessmen buying cars in Germany, making a quick buck back in Poland, and going back for more. There’s nothing wrong with buying a car this way, but if you know the system, know the language, and don’t want to pay the middle man, you can just go to Germany yourself to get a car. The difference between a car on a lot in Poland, and the same car bought straight from a lot in Germany can be even up to $4,000 to $5,000 dollars, and if one would have that money anyway, it could mean a better, younger, and better equipped car.

It’s worth pointing out that most cars in Poland are brought over from the West. I also found through a couple  of conversations that when someone buys a car new from a dealer in Poland, they tend to casually point that out almost as a status symbol. There’s some reasoning to it I suppose, if you spend $40,000 on a brand new car in Poland it definitely puts you up there in the social standings. Bragging about it however brings you right back  down to the douche level you were always in.

One of the more interesting cars I saw there was a Spanish made red Seat Leon. The window wiper system looked interesting, with the wipers designed to fold away in the vertical position along the window posts. Never seen that before. I also found a VW Vestfalia camper, the only car I’d ever need, but not at $40,000 dollars, and certainly not while out of a job.

My very own set of snow tires.