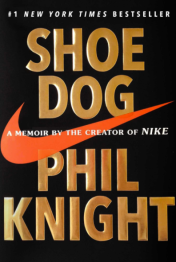 Nike is a huge. Today no one would ever question the might that Nike has in the shoe business, or in the sports industry in general.

Nike, just do it!

Micheal Jordan, Tiger Woods, just a couple of super stars we automatically associate with the Nike swoosh. But do you know where the idea of the swoosh came from? Or who designed it? Or why Nike is called Nike to begin with? Or perhaps you would like to know how many times Nike almost never came to be, and that today we could have been talking about Onitsuka Tigers and not Nike Airs. Wait, what? Who’s Onitsuka…

The book Shoe Dog: A Memoir by the Creator of Nike by Phil Knight is just that, a history of the company from the basement idea to the international sensation. It’s told by the founder himself and the book slowly picks up speed all the while giving you the sensation that the end of Nike is imminent before Nike is even named Nike.

To me it was simply incredible that Nike became the global company so recently. I mean Phil Knight and Bill Bowerman set it up in 1964, just a couple of guys from Oregon. For some reason I thought Nike was around from much earlier that that. I got so into the book that I automatically got the urge to get myself a pair of Nike Cortez running shoes.

Ania and I went into a Nike store in a local shopping mall and there they were, Cortez’s, in eight or ten different colors. I had to have them. Until I put them on that is. And then I realized that I’m simply too fat for those 🙂 The Cortez’s have a very slim sole, I felt like walking in high heels…not that I’ve ever walked in high heels before… Anyway, the Cortez’s are not my thing. But the book explains how the name came about, and it’s a fun little fact. Same as where the Air technology came from in the Nike Air. You’ll never look at a Nike shoe the same again. I guarantee it, and I highly recommend the book.

PS. Of course the book is also a great lesson of passion and perseverance. For anyone out there struggling to get make their mark on the world, read this book and think of your next Cortez move!