This Magical Week was a tough one. I feel mentally drained and beaten by the past five work days. Need to clear my head, reorganize, and get back to it.

Before wearable, before portable, there was luggable. Silicon Cowboys is a story about a group of engineers crazy enough to start a company to rival IBM in the 1980’s. A company they would call Compaq, with a goal of making the personal computer even more personal by allowing the user to carry it with him. I loved it when they showed a suitcase-size luggable computer. It’s incredible how far we’ve come in the past 40 years.

And speaking of a Compaq documentary, Halt and Catch Fire is Hollywood’s take on that story. A lot of HACF scenes are used in the documentary, and some actual events in the documentary explain the story line of the series. Turns out it’s true that once you had a look at the IBM code you could no longer work on Compaq software because you were no longer credible not to have used some of IBM’s code, and that IBM would perfect their legal game by sending an army of lawyers to intimidate their competitor. I stopped watching the series some time ago about half way through the second season, but I’ve got the rest plus the entire third season all lined up for this coming week.

This entry will be much more useful to my Polish readers since the podcast I’m about to reference is all in Polish, but this past week I spent a couple of hours listening to a negotiating strategist explain best methods and practices to getting what you want out of a deal. BATNA and WATNA seem to be the key here, Best Alternative to Negotiated Agreement and Worst Alternative to Negotiated Agreement. Simply stated, having a list of positives and negatives for yourself and for the other party to either get the other party to lean your way during the negotiation, or to know when to let it go and walk away. Most of the podcast focuses on apartment/property negotiations, but there was some car buying info in there as well and I especially paid attention to that with a newer car experience imminent.

“He Who Dares, Wins”.  Used by British elite forces, SAS. Challenge the status quo. Do something daring. Win.

I’ve been using the Momentum plug in for some time now and love booting up my computer to a new background every day. Not exactly a desktop, but every time I launch Chrome it makes me pause and look around the scenery for a while. If anything, it slows me down and avoids pointless web browsing. I found myself saving quite a few screenshots of the starter page. Here are a few I found especially pleasing. 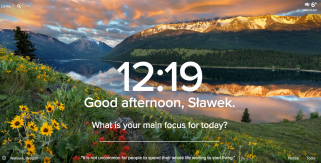 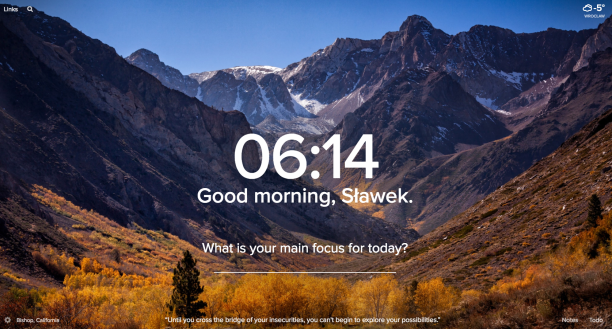