It’s never too late to write about something sweet, right? After all, Thursday wasn’t that long ago anyway, and it being a Fat Thursday to boot, I think it deserves an honorable mention for this week.

Not that getting my face stuffed with sugar deserves honorable mentions. But Ania made some pretty cool meringues for the occasion and I wanted to at least showcase that.

I was never a big fan of meringues. Baked sugar just never did it for me. But as with so many other things, now that Ania makes it I kind’a feel like I’ve been missing out on this delicious treat all along. Ant that’s because she makes it in her own special way, with her own special toppings and a cream filling that all adds up to a meringue burger.

Polish donuts are all the rage every Fat Thursday and this year didn’t disappoint. Donuts at work, donuts on the train, it was a donut kind of a day. One thing I’ll never understand is the hour-long lines at some of the better donut joints around the city. I do appreciate a good donut as much as the next guy, but I don’t think there will ever be a donut worth an hour or longer wait.

I’d rather go home to my wife and her meringues. 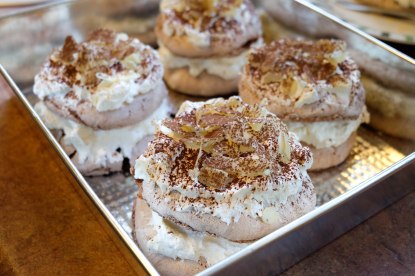