This past weekend we visited the Karkonosze mountain range in the south-west of Poland. It’s only about an hour and a half drive from Wrocław and even though the weather wasn’t in our favor we decided to get out of the house after all.

Our first stop was in the city of Jelenia Góra, the biggest city in that particular region. From there you’re only minutes away from many smaller foothill towns like Karpacz or Szklarska Poręba, both very well known for their mountain tourism. Jelenia Góra has a very pretty city center, but it’s really nothing special when compared to Wrocław’s own, restored, and much more active city square. But we happened to come at a time where a few local artists, many of them glass makers, were showing off their products.

After a walk through Jelenia Góra we drove to a town of Jagniątków to see the house of Gerhart Hauptmann; a 1912 Literature Nobel Prize winner “primarily in recognition of his fruitful, varied and outstanding production in the realm of dramatic art.” The house has been restored and could be worth a visit by anyone who’s read Hauptmann’s works such as The Weavers or The Rats. But to me…it was just a nice house; I will read his books another time. 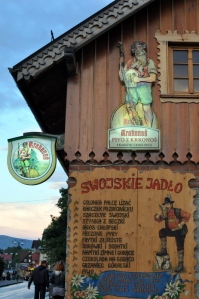 The foothill town of Karpacz was next. Like any tourist town it’s full of vendors, small shops, pubs, and restaurants willing to do anything and everything for your buck. Pretty much every other house in Karpacz advertises cheap rooms, but if I were you I’d call around first. We stayed a place called Topaz and were extremely happy with the room and more importantly the cost. The lady that owns Topaz is very friendly, told us about what trails to take, gave us tea to brew in our thermos, and even told us her entire life story. Maybe a little too much information, but it made us feel at home. We walked around Karpacz that evening, ate some well prepared fish, and tried but failed to buy Czech Krakonos beer; most pubs had it on tap, no one had it in a bottle. 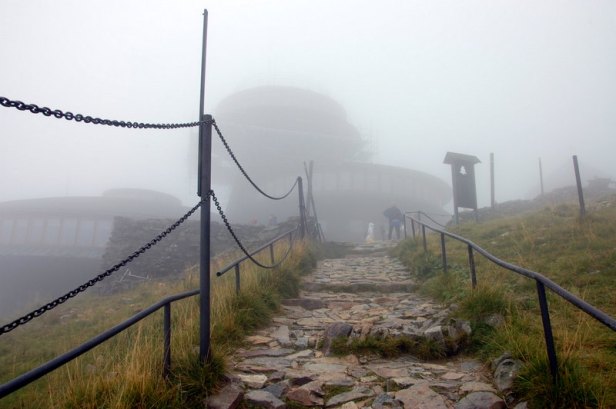 It rained all night but the next morning was beautiful and we decided to hike up the mountain of Śnieżka. At 1,602 meters (5,256ft), Śnieżka is the highest peak in the Karkonosze mountain range. Said to take three hours, we reached the summit in two, with every few meters the weather changing for the worse. By the time we got to the top the cloud cover was low enough to drop visibility down to only a few meters around. There is a disc-shaped observatory at the very top, and it reminded me of the movie “Independence Day” as it was slowly emerging from the clouds. Though we found no aliens, we did find hundreds of people zooming by left and right. There is a ski lift that shuttles people up and down all day long, so while we had worked fairly hard to get there, others who had just gotten off the lift and had all the energy to race to the top were zooming right by. 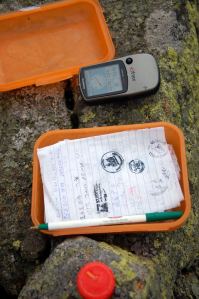 The best part of getting to the top was geocaching. I had downloaded a few coordinates into my GPS before we left and we spent a few minutes looking around. We found two out of four caches we looked for; both were wet from the terrible weather conditions at the top. From Śnieżka we hiked, well, we walked on the top of the mountain range to a rock formation known as Słoneczniki (Sunflowers). We walked, because the entire path is pretty much paved with stones, the ground is fairly flat, and all that’s left to do is walk fairly straight and look around at the beautiful scenery. The Karkonosze mountain range also serves as the border between Poland and the Czech Republic, and a few steps in the wrong direction could lead you across the border. We hiked down through some truly beautiful scenery and finished our hike with a visit to the Wang (Vang) Stave Church, bought in Norway and re-erected in Karpacz in 1842 by a Prussian King. After 22 kilometers of hiking we were ready to come back home.

“In memory of the fallen, as a warning to the living“.

Plaques honoring those who have died in Karkonosze mountain region. Most of the names belong to members of GOPR (Górskie Ochotnicze Pogotowie Ratownicze – Mountain Voluntary Rescue Personnel) that have died while helping others.

I should point out that only two photos here are mine, most were taken by Karolina and can be seen here:
http://picasaweb.google.com/karkas3300/Karkonosze2010#

One thought on “Karkonosze – The Giant Mountains”