Last week Karolina and I traveled 830 kilometers (515 miles) due west to the beautiful wine region of Germany called Rheinland Pfalz, also known as Rhineland-Palatinate in English. Rheinland Pfalz is one of 16 states of the Federal Republic of Germany and borders with France, Luxemburg, and Belgium. It is Germany’s leading wine producer and is also the state where BASF, the biggest chemical company in the world, holds its headquarters; but honestly BASF only reminds me of old audio tapes rather than anything chemical.

Karolina spent 11 years growing up in Rheinland Pfalz and our tip destination was her fathers home in Idar-Oberstein. The trip was really an homage back to Karolina’s youth and we planned to visit her old town and meet with some of her childhood friends. Idar-Oberstein is the capital of Germany’s gemstone industry with population of around 30,000. It’s located in the valley and I don’t think there’s a perfectly flat place anywhere in the city; everywhere we went we were always walking up or down the hill. On second thought, the one perfectly flat surface was the four lane road built literally above the river, a river that that still flows underneath dividing the city of Idar and Oberstein.

The city has a small board walk, where most shops cash in on the gemstone industry, a church built right into the side of a mountain, and ruins of two castles right above it. These are the extent of tourist attractions in Idar-Oberstein, well…omitting the fact that on good nights you can hear artillery fire from the training grounds of Baumholder U.S. military base, a military installation that was once the largest concentration of American combat soldiers outside of the United States!

After walking trough the short boardwalk we climbed hundreds of stairs to the Felsenkirche church. Legend has it that two noble brothers, Wyrich and Emich, both fell in love with a beautiful girl named Bertha. Neither one knew of the others feelings toward the girl, and while Wyrich was out of the city Emich managed to not only tell Bertha about his feelings but he also married her as well. That is where I have to call ‘bull shit’ on this story. He didn’t know his brother had the hots for the same girl? Didn’t they ever sit around the table just shooting the shit sayin’ “Have you seen the volkswagens on Bertha?” And if Emich didn’t know about it, then why did he wait till his brother was out of town to get married? I call bull shit. But anyway… when Wyrich got back and Emich told him of his marriage, Wyrich threw him out the window from their mountain top castle sending him to his death on the rocks below. Naturally, Wyrich immediately felt remorseful and after a counsel with a local monk he was told to build a church at the site of his brothers death. The legend goes on to say that no one knows what happened to the beautiful Bertha after her hubby took the plunge, I’m guessing Wyrich threw more than one person out the window that day, but that’s just me. 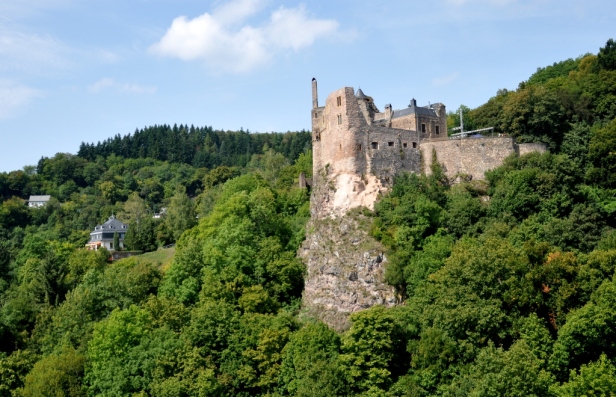 The church is very nice indeed, with a beautiful view of the city down below. From the church we visited the ruins of the castle where a sign reads “This is the site from which the brother was thrown”, and from there we walked to the castle where beautiful Bertha resided. All in all it was a nice tour of the city with Italian ice cream and gemstone souvenirs at the end.