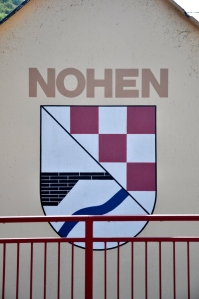 After our tour of Idar-Oberstein we drove over to Nohen, a small town some 10 kilometers away. Nohen is the town where Karolina and her family lived from 1988 to 1999. The house you see below is THE house and the top floor was all theirs.

Nohen really doesn’t have much to offer besides peace and quiet, which is great if that’s what you’re looking for. Otherwise the town seemed deserted though we did manage to get some strange looks for simply wondering the streets. I suppose in a town that small any stranger walking around gets noticed.

We walked to where the old playground was and where the kids would sled down the hill in the winter months. We saw the the soccer field where Karolina’s brother once played and I was full of envy thinking that a town this small has a green grass soccer field you could play golf on while my neighborhood in Poland four times the size and ten times the population doesn’t have one!

A few photos and a tear or two later it was time for a drive to Birkenfeld where some of Karolina’s friends were meeting us for coffee and beer. While there we came across a parking lot full of mini-monster trucks. Sadly the monster truck show took place a day earlier and the crew was already packing up. Is it just me or does Rocky’s head look weird? And I really hope my old BMW 316 will not end up as those bimmers on the trailer did. 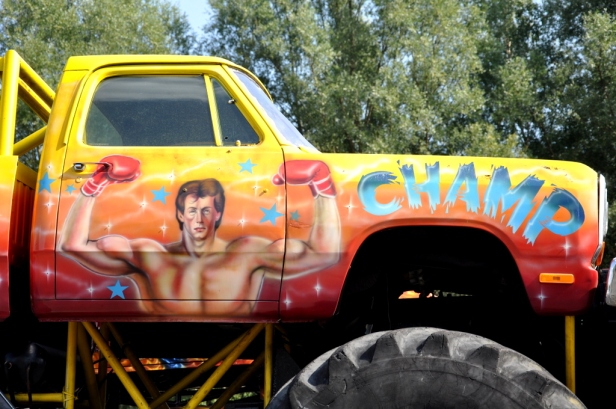 Next we stopped by the church where Karolina had her first communion and she told me how for her first confession every kid had to bring in a rock and then throw it away afterwards; the rock symbolizing all the heavy sins till that day. Of course Karolina and her friend Marta forgot the rock and had to find one in front of the church…

From the church we walked around a bit and finally sat at a bar where we met up with her friends and where I sat pretty much silent for three hours listening to all the German speak. Yup, I was that patient and with only one glass of beer, too!

One thought on “German Road Trip Day 1.5 – Nohen and Birkenfeld”