A couple of weeks ago I got my hands on a Vespa PX125 by Piaggio. A model made sometime between 1983 and 1985 according to the VIN number. I did not buy this scooter, nor is it mine to keep. I was simply asked to evaluate its current state as it hasn’t been ridden in a couple of decades. The scooter’s owner, an Italian gentleman living in Wrocław, recently shipped it from Italy in hopes of a complete restoration to bring this scooter back to its original shape. This however, maybe easier said than done.

I’ve never dealt with a Vespa before, but a quick phone call to a buddy of mine Przemek gave me the only answer that mattered: “the PX125 is an absolute gem of all Vespa scooters”. He then showed up at my place within the hour just to look it over. But Przemek is a gear head, a motorcyclist, and a mechanic. He knew exactly what screws to touch to bring this 30 year old scooter back to life. Sure enough after a few kicks, some 2-stroke gasoline mixing, and a few blows of the carburettor jets, the scooter came to life.

The clutch was stuck, but Przemek dropped it hard into the first gear and popped a wheelie onto the street. They sure don’t make ’em this way anymore. The smell, the noise, my head still hurts from the fumes. But it sure is fun. And what a simple design, too. Piaggio has been making this model for some 40 years now, pretty much unchanged.

As you can see by the photos, the scooter needs a lot of TLC (tender loving care). I’m going to bring it back to being street legal. That includes a new speedometer, new front lamp, new tires, a spark plug, and a brake leaver. I don’t think I have the skills required to do a complete restoration. Replacing a few parts, sure, but taking it all apart and the putting it back together might prove to be more than I bargained for. Especially when managing expectations of a customer emotionally attached to this project.

And that’s yet another cool thing about this scooter.  It’s been in the hands of a single owner its entire Vespa life. That Italian gentleman I mentioned is named on all of the paperwork dating back to 1985. You hardly ever see that anymore.

Anyway, here are a few photos of the scooter along with a short video of us getting it to work. 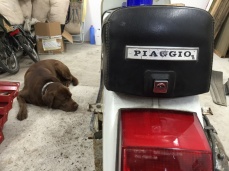 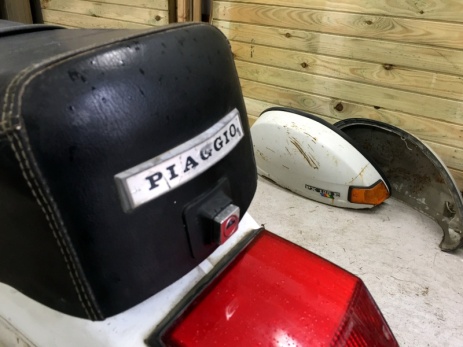 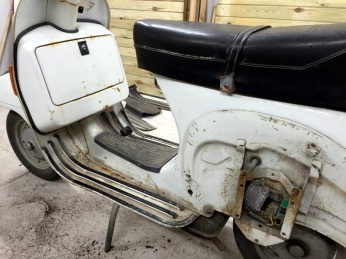 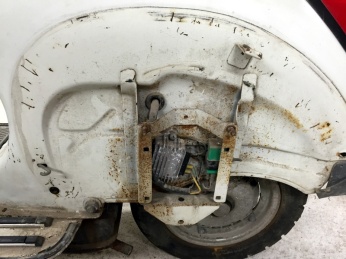