I spent a day and a half in Bilbao, Spain this week for work, and not only did we get there on the first calendar day of the summer, we also arrived on their hottest day of the year thus far. At 38°C (100°F) it was quite warm, though it just so happened that our very own Wrocław wasn’t too far behind clocking in at high thirties on the centigrade that day as well. My coworker and I had a few hours after our meeting to walk the city to enjoy some pretty interesting architecture. Most prominent was Jeff Koon’s “Puppy” located next to the Guggenheim museum. At 43 feet tall it’s awesomely colorful. The Guggenheim itself looks almost identical to the Walt Disney Concert Hall I’ve seen many times in Los Angeles. Perhaps ‘identical’ is too much, but the lines look extremely similar.

No camera on this trip, taking only my computer bag packed for a night, my spare socks took up camera space in my laptop bag. But here are some iPhone shots. 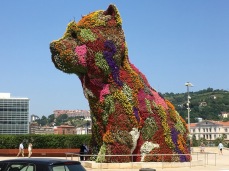 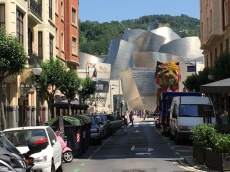 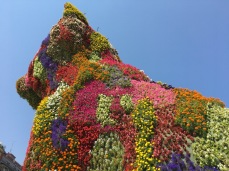 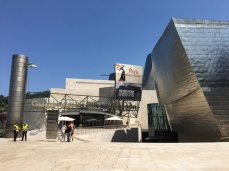 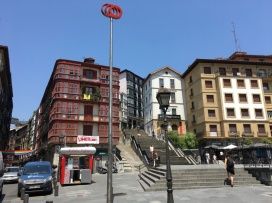 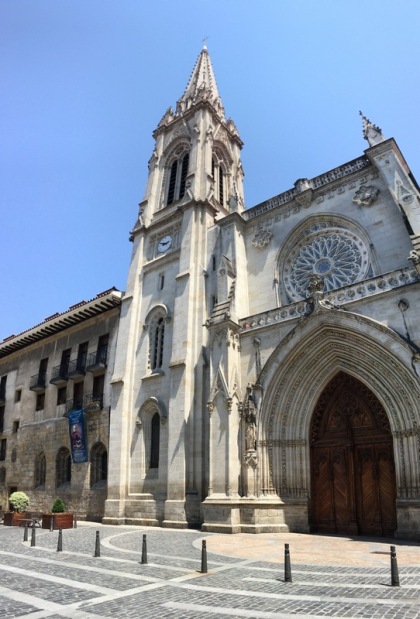 About a year ago now I sold off my Nikon gear and switched over to a work-issue FujiFilm X-T10. I like the form factor a little more than a DSLR, but for some reason, I’ve had the hardest time figuring this camera out. It’s almost as if there’s too much packed into this small body and things and switches are not where I’d expect them to be.

For example setting the camera in the aperture priority mode: most all cameras have an “A” or an “Av” dial. Not this camera. Same for shutter priority, or most everything else for that matter. I used it several times, each outing ending with frustration. Until I searched YouTube and found a quick hour-long video that explained the camera in detail.

The video confirmed that indeed FujiFilm didn’t play by the rules with dials and modes, but it did a great job showing the viewer where to look, and more, how to set up additional features like speedier autofocus. I should have looked this up earlier. Duhhh! Camera works like a charm now…now that I somewhat know how to use it.

3. Get Me Roger Stone

Holy shit, have you heard of Roger Stone? I came across this documentary on Netflix by accident but couldn’t believe my eyes from the very start. That guy is a political rock star that knows no boundaries to get someone elected. I mean the dude has a Richard Nixon tattoo on his back! I don’t remember the last time I felt that frustrated/amazed after watching a documentary.  A must see, especially now that his boy Trump is in the office. It will give you clarity on a lot that’s going on now.

Finally finished listening to this 13 hours audiobook, and I’m glad I stuck with it to the end. The book has a lot of cool insights into the production of all recent Pixar films, so much in fact that I started watching all of Pixar’s productions in chronological order just so that I can see how Pixar improved their movies. The book discusses a lot of hardships that come along with running a company that’s ahead of its time and on a brink of bankruptcy, about looking for a buyer due to George Lucas’ divorce, about Steve Jobs being the knight in shining armor, and about joining forces with Disney. Tons of great insider info here.

Most importantly the book tells a story of being good to your employees. Let them create, let them feel good at work, let them express their creativity. Lead them, and watch them flourish.

By the way, here are all Pixar movies in order of release:

I also finished reading Total Recall by Arnold Schwarzenegger. It’s 650 or so pages, and while it had some long chapters it too gave a lot of very good insights into Arnold’s rise to fame. This guy is a machine. He approaches his life with Terminator-like precision, sets goals, reaches goals, then sets bigger goals and so on. From a small town in Austria to a governor of California, he’s got the grit I could only dream of. I highly recommend his book… it almost makes you forget his maid story 🙂