This past weekend had quite a lot going for it and I’ll try to do my best to explain my sudden South Africa Instagram photo shooting. 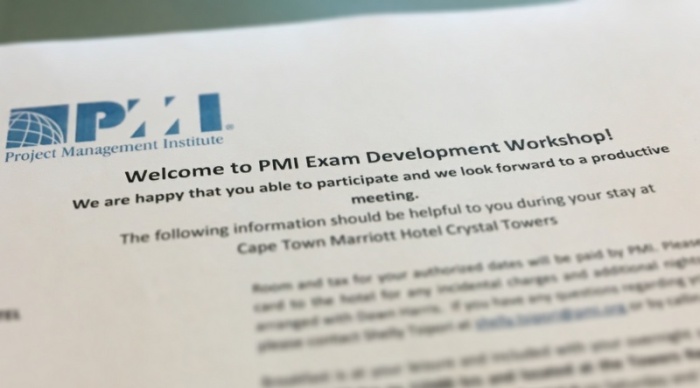 First, I was invited to participate in item writing by Project Management Institute, a certification body behind my PMP certificate.
Second, I was flown by PMI all the way down to South Africa to take part in this event.
Third, I met a lot of very interesting people of many different nationalities, industries, and background knowledge areas.
Fourth, I met quite a lot of the PMI personnel that make certifications such as Project Management Professional possible.
Fifth, did I mention I went to South Africa? 😉

Item writing is essentially question writing for future PMP exams. This being a mega writing event there were about 150 participants in total divided into writers and reviewers. I was placed in a reviewer panel in a table of five people. During our orientation evening, a presentation slide showed that a definite majority of participants were from South Africa. A fact later confirmed at my reviewer table as I was the only non-South African there. Of course English was the official language for both reviewing and discussion in general, but I loved it when the guys at my table forgot that I was there and launched into an Afrikaans debate over the question at hand. I had no idea how much Dutch there was in Afrikaans.

Putting five project managers with different experience, a slightly different understanding of the standards, and different characters around one table may seem like asking for trouble at first. But that’s precisely the point. Between the five of us, we had some forty years of experience in managing projects, mostly because one of us was a Santa Clause look alike with a PMP certification from the 1990’s. This was of course repeated throughout all tables and all review and writing rooms. The idea is that people with experience make sure that the exam is fair and that it adheres to standards set in the PMBOK, our project management bible. Test their knowledge, but don’t confuse them with the question itself. An exam for PM’s, by PM’s. How awesome is that?

To me reviewing was a great opportunity for brushing up on my knowledge of the standards as well as a look at what’s coming up in the next, 6th revision, of the PMBOK coming out later this year. It also allowed me to discuss other’s interpretation of certain questions and answers. You ever feel like a question could have four correct answers? The five of us did a pretty good job at keeping opinions at bay and instead on focusing on the core of the question.

During the many networking events taking place in the evenings I was able to meet project managers from all over the world, but again, mostly from South Africa. The country of South Africa seems to be dealing with quite a lot of issues at the moment, its government not being the most popular of rulers. Most PM’s from South Africa seemed to be into some sort of a civil engineering project that dealt with local infrastructure. Some did mining projects, others IT, roads, telecommunications. Theft of copper popped up quite a bit. Did you know that South Africa is one of the biggest exporters of copper…and that South Africa doesn’t mine copper?

The cherry on top was meeting the actual PMI staff organizing this and other events. I have been in touch with some of the PMI folk over emails, but putting a face to the name was great, and actually having a conversation over a glass of wine with the people bringing PMP to future project managers was better still. A lot of great conversations ensued, including having Baywatch’s Pamela Anderson on my “top three people to be in a jacuzzi with”… but I digress.

I’m very grateful to have been included in this mega event and look forward to future endeavors with PMI.

EDIT: I don’t currently have a photo of my group, but will update this post once some come through.