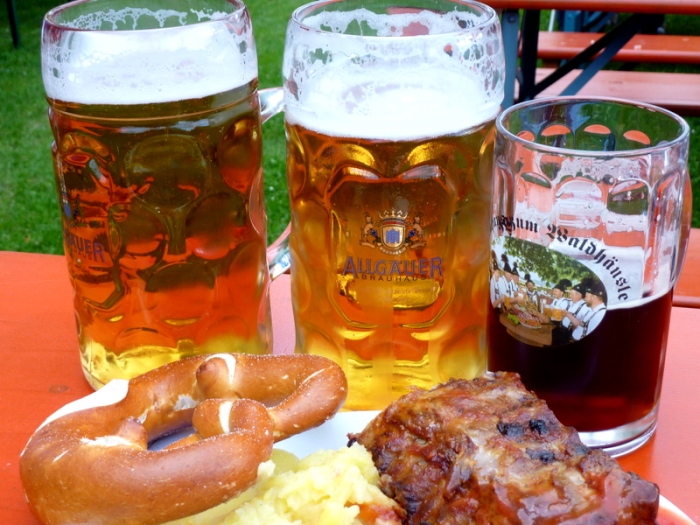 Kempten is the largest city in Allgäu, a region in the south-west of Bavaria, Germany only 26 miles away from Austria. It was also my recent business trip destination, a short 500 mile drive from Wrocław. Short, if you consider the 140-150 mile per hour speed on the autobahn we were traveling to get there.

But first things first; beer. Bavarian beer is the tastiest beer I’ve ever had. All kinds too; from Hefeweizen to Pilsener to the darkest Schwarzbier, they’re all simply delicious! And after our business end of the trip was concluded we were invited to a traditional Bavarian beer garden. Every Thursday the beer garden pictured below serves up an insane amount of food and beer while entertaining you with a different folk group every week. The beer garden season is short, from May to September at the latest, and that is why each folk group only has one chance a season to perform, there simply isn’t enough time. Performers are paid with food and beer for their work, but it is the the way in which beer is delivered to the crew that is engineering at its best. 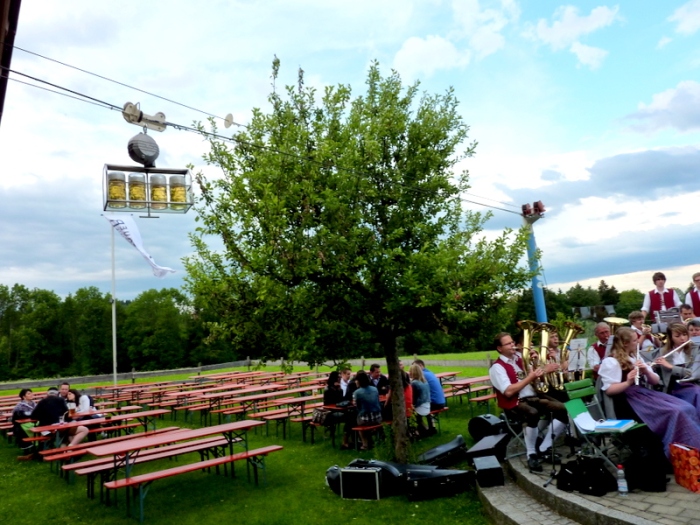 Meet the beer lift. This suspended system is first lowered inside the beer house and filled with four, one liter, beer steins. The stein bucket if you will, is then sent on its way toward the band where it is promptly lowered, unloaded and refilled with empty steins. Awesome!

The beer kept flowing and the band kept playing until we were eventually chased away by a lightning storm. After  4 pints of beer it was time to go home anyway. We did find out that you’re allowed about a stein of beer and drive home in Bavaria. I haven’t fact checked this yet, but it was explained to us that Bavaria’s culture of beer wouldn’t allow for a zero tolerance law to go in effect. We were driven back to our hotel, and it was the fastest ride of my life.

240kmh translates into 150 miles per hour. I’m sure some will tell me they’ve gone faster on their way to Vegas once, or that 150mph is nothing compared to their buddies’ drag speed record. That’s all kosher, but in most cases it’s also not legal. Going 150mph on Bavarian autobahn however is just fine. I’ve personally never gone this fast (ever!) much less for a reasonably long period of time simply traveling from A to B. The speedo on the Mercedes-Benz we were riding only went up to 260kmh, so we were dangerously close to the limit of where even German engineers said “ok, that’s enough”. Oddly enough the driver, our German tour guide for the trip, didn’t even seem to notice the fact that cars we were passing seemed to be at a stand still in comparison. Driving to and from Germany was also fast which made for a shorter travel time that we promptly evened out with slow moving vehicles every time we stopped for gas; because 140mph equals some 6,000 rpms and a fuel level drop you actually see on the gauge in real time on a 1.4 liter Volkswagen engine. Fun.

2.5 liters of beer, traditional pretzel and potato salad, with a full rack of ribs.